International trade and economic growth of the Philippines

No country has all the resources or capacities to meet the needs of its own people. However, by developing and exploiting its domestic resources, a country can produce a surplus and trade it for the surplus products of other countries that it needs.

In this modern world, international trade is at the heart of the global economy and is responsible for much of the development and prosperity of many nations. First with Western countries starting with England where the Industrial Revolution began, followed by Japan which became the first non-Western country to join the developed world from the West, and later by South Korea and other newly industrialized countries, including China.

However, international trade also has its own drawbacks. This can lead to over-specialization, for example, with workers losing their jobs when global demand for their product falls or when domestic consumer goods can be produced cheaply abroad. The jobs lost due to such changes can cause a lot of problems for many people and some countries.

International trade can also be bad for the global economy when a country pursues a policy of mercantilism that demands more exports than imports to the detriment of other countries, as the United States thought it is doing. China with regard to their trade relations.

Commercialism was at its peak when precious metals, such as gold and silver, were deemed essential to a nation’s wealth and military might. If a nation did not own or have access to mines, trade would be used to obtain these precious metals. This requires a “favorable” trade balance or a surplus of exports over imports to the detriment of other countries which then force them to respond by reducing their own imports. When this happens, many countries will suffer from reduced trade.

The laissez-faire advocates criticize mercantilism by claiming that there is really no difference between internal and external trade and that trade is beneficial to all trading partners. Today, most countries of the world participate in international trade, including the Philippines under the aegis of the World Trade Organization.

It can be shown that when a country’s net exports are positive, its gross domestic product or total output of goods and services is higher than when net exports are negative. Thus, many countries would strive to export more than their imports like what Japan did successfully after the last war until the 1980s and China from the 1980s to today.

Both did so primarily at the expense of the United States, if the American narrative is to be believed. Hence their antagonism towards the Japanese in the 1980s and now towards the Chinese, whom they are currently pushing to open their market to more American exports.

What is our own business experience in the Philippines?

Well, it is unfortunate that most years in the past not only our total trade is one of the smallest in Asia as a fraction of GDP, but we have also always imported more than exported in the past. .

This could be one of the reasons our GDP has been one of the slowest to grow over the last fifty years of the previous century, which puts us behind our neighbors in terms of material well-being as we move forward. let us enter the new millennium.

We could have done more if we also worked to reduce, if not reverse, our trade deficit which reduces our GDP growth. The table below shows that since 2016 our trade deficit has grown by twenty million US dollars per year compared to tens of millions or less in previous years. This is not a good sign because it means that much of our efforts to increase aggregate demand in order to increase our GDP are only widely disseminated by our large and growing trade deficits. 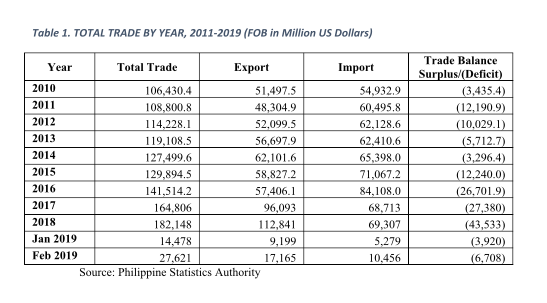 Disclaimer: Comments uploaded to this site do not necessarily represent or reflect the views of the management and owner of Cebudailynews. We reserve the right to exclude comments that we deem inconsistent with our editorial standards.